ANGELMAN SYNDROME: the story of Anna

Angelman Syndrome (AS) is a rare disease caused by an adverse genetic mutation, but which in most cases is not hereditary. Children at birth seem absolutely healthy, but then in early childhood the disease sends its unambiguous signals and so the children that are diagnosed with it grow but cannot speak, have severe cognitive and motor skills and often suffer from debilitating crisis seizures. But despite this, the "Angelman children" are very cheerful, laugh often and love physical contact. Anna, mother of 5-year-old twins Mattia and Gaia, who are very affectionate and both suffer from Angelman Syndrome.

When did the first signs of the disease appear?

Around a year and a half: no walking, no kind of relationship, no speech. Pediatricians said that everything was normal and it was just a matter of laziness. But my husband and I preferred to get to the bottom of it and we went our own way.

So, how and when was the diagnosis made?

We turned to a neuropsychiatrist, who confirmed that they had this delay and advised us to follow two paths: one of rehabilitation and one of investigation. After a series of examinations, we began to inspect Angelman Syndrome, which was later confirmed by genetic tests.

How are the children today?

They can move well enough, they can even ride a bicycle and climb the stairs, albeit with difficulty. They have trouble sleeping and often wake up at night.

Can anything be done?

Other parents use medications. I am a bit reluctant. We have no started to give them a bit of melatonin and see what happens... whether it can be useful. Like everything else, in the "battle" against the disease, we live hand to mouth.

Do they have seizures?

He had 3 seizures in one day, and then no more, thanks to the drug therapy that he still takes. She has had a seizure, but examinations indicated that it was a sporadic episode and she should not be prone to them. However, they both need checks every 6 months. Then recently an association of the syndrome with scoliosis was discovered, so that we keep them checked for that too.

As soon as we knew the diagnosis, we began this journey of alternative communication, using images. So have a notebook, made especially for them, which they must always carry around. For example, to tell us which game they want to play, they indicate the relevant figure.

Is there a Patient Association which you approached?

There's ORSA (Angelman Syndrome Organisation) and we follow their initiatives. We happened to attend the conference, organised by the Association and open to parents, involving physicians and international experts on the disease. Also online there is a page on facebook for keeping in touch with other parents. And it's useful to discuss and exchange views. It is important to know that there are others in your same situation, helping you to move forward along this very tiring path. The hope is that one day research will be able to give us a cure for this rare disease.

CHURG STRAUSS: the story of Carmen

An autoimmune disease that causes micro-infarcts. Various organs are affected. The disease is rare, in fact, and every year there are very few new cases in Italy, between 2.5 and 7 per million inhabitants. We do not yet understand well either the causes nor the mechanisms, but it is certain that it is an autoimmune disease, which is why some components of our defence system start attacking our body's structures "mistaken for enemies."

Carmen, 45 years, is a mother of two children. First from asthma and then from Churg Strauss she has to "deal" with excruciating pain that doesn't even allow her to sleep at night.

When and what were the first signs of the disease?

About a year and a half ago on return from vacation I had the first symptoms, I started to lose sensitivity to the big toe of the left foot and within a week I had pains throughout the body, and in particular those in the hands and feet were so strong that they did not allow me to sleep. At that point I went to the emergency room and there they decided to check me into in Neurology (10 days had passed since the onset of the first symptoms).

How long did it take and how did the diagnosis arrive?

During my recovery they gave me all kinds of examination, but they all failed while I got visibly worse, after ten days my condition was disastrous, I could no longer move a hand and I could no longer walk, quite apart from the fact that I had not slept for 20 days, I had lost my independence and I was no longer self-sufficient. They finally decided to consult a rheumatologist who made the diagnosis. The discovery that I was suffering from a rare disease through us into turmoil. My husband did a search for centres of excellence and we decided to turn to Niguarda hospital. There he met Dr. Schroeder who welcomed us with exceptional humanity and skill.

Now you are being treated, what medicines do you have to take, and how regularly?

I have to take cortisone daily and immunosuppressants orally in doses which are definitely lower than in the first year.

Thanks to the treatment have you recovered completely?

The therapies have been essential to my recovery, but no less important was the physiotherapy. Thanks to the neurocognitive rehabilitation (editor's note: which took place at another facility), I recovered my lost independence and went back to a nearly normal life. Today my condition is pretty good, I still have some motor-sensory deficits, but the thing I find most debilitating of all in carrying out daily activities is the foot pain.

How often are you checked?

Every month I go to the hospital to do blood tests to monitor in particular the trend of eosinophils but also side effects caused by the therapies and depending on the results they decide from time to time what other investigations should be carried out.

It is possible to book admissions,
visits, exams and diagnostic tests


Staff is ready to give information and help you for bill and Insurance information or for Health National System fee. 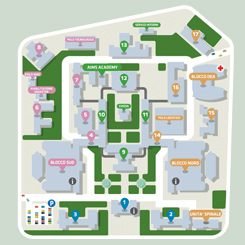